I have learned some important things over the years through the activities and wilderness that Banff has to offer. Sure, perhaps I should tell you about how to avoid getting eaten by a grizzly or how to survive if you get lost in the woods. However, some things are more important, and recently while canoeing around Banff, I made a great discovery. If you rent a two-man canoe and sit on the back, using your oar as a rudder, you can secretly get away with doing very little paddling. The front paddler will never be the wiser as he tries to keep a rhythm and at the end, you can enjoy a drink and talk about how paddling was much harder than you thought it would be!


I booked through Banff Travel and they confirmed my hopes – I was able to go out at my own pace with a friend. There was a choice of kayak or canoe, but with the old motto ‘To Canoe is to be Canadian’ in my mind, we chose canoes. The feeling of gliding (especially while with the current) down the Bow Valley is one of the greatest freedoms I have experienced since the sixties!
There are a couple routes to chose from, but every way I looked was paradise so option one was happily accepted. The Bow River is a gentle portion of what is normally a major waterway. We floated by Canada’s first railway line, paddling gently (or not at all, in my case) as we admired the tracks and imagined ourselves back a hundred years.
The Bow Valley is renowned for its abundance of wildlife, and as the sun shone gently down on our silent canoes, we saw some incredible birds and a few elk too. I thought I saw a grizzly bear but the shimmering sun and strenuous effort of paddling for two minutes might have had a say in that judgment! 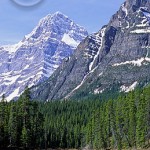 All in all it was two hours of healthy and peaceful canoeing for the extremely fair price of $28 (It is usually $28 for one hour but there was, and still is, a 2 for 1 special) One last tip: When canoeing back into the paddock where a friend is videoing your return, remember to paddle while being filmed. The result was an angry friend but a great time (especially for me!)
For more about canoeing and kayaking.