Dr. Cheadle and Lord Milton began their journey in their native England, landed in Quebec in July of 1862, and travelled overland by stagecoaches through American territory to Fort Garry (Winnipeg).
Only two days after their passage through Sioux territory the very same stagecoach they had travelled on was attacked and all aboard were killed. From Fort Garry they travelled by way of canoe and steamer towards Fort Edmonton. At Fort Pitt, Cheadle and Milton were fortunate to take on the services of a one-handed and competent Metis guide accompanied by his wife and young son. Louis Battentotte (the Assiniboine) proved to be exceedingly valuable to all concerned. At Jasper House the group hired an old Iroquois to guide them a far as Tete Jaune Cache. 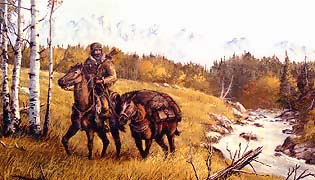 On Thursday July 9, 1863, Cheadle, Milton, the Assiniboine, his wife and son, and the old Iroquois guide crossed the continental divide on the Yellowhead Pass and camped “for dinner at the head of Buffalo Dung Lake”. “Our guide told us this lake was a great fishing place for the Shuswaps”(Cheadle)”and frames for drying fish bore out this contention” (Milton and Cheadle). “Milton and I tried the spinner and fly from the raft, and others fished from the bank; but it was no use; no trout to be had, great disappointment”. (Cheadle)
Cheadle claimed the “road” to be pretty good all the way,” that is, as far as Buffalo Dung or Yellowhead Lake. From that point on they were met with “muskeg, water, mire, marsh in the low ground…” (Cheadle). Before reaching Moose Lake, Milton, Cheadle and O’Byrne all had narrow escapes with severe injury and death. Writing in his diary Cheadle claimed that “everybody was tired and glad to camp, and we had a feast of bread and vegetable soup, this being the hardest day we have had, and during the afternoon the worst road.”

… if this 10th of July was a hard and harassing day the 11th was still worse… we reached Moose Lake before Noon, and travelled along until dark without finding any resting place. The lake was high, and the sides of its basins mountains, up to the base of which waters spread. It was again a day of marching through water, and the horses perversely wandered off into the deeps, and floated about, soaking flour and pemmican. Accumulations of driftwood barred the passage along the shore in many places, and we were compelled to scale the mountain sides. Horse after horse rolled back in the attempt, and we had to cut off their packs in the water, and carry up the loads on our backs, to enable the animals to scramble up the steep ascent. We walked hard in the hope of reaching the end of the lake before dark, but the sun went down when we were still several miles distant, and we were compelled to spend the night in a bare sand pit, where there was not a blade of grass for our hungry and tired animals. Cheadle and Milton, July 10, 1863

For the next few days they groped along the shore of Moose Lake. The horses floundered in the mire and mud, swam out into the lake (more than half of their pemmican and much of their flour became soaked and unusable) and stumbled and rolled head over hooves down the mountain side.
On passing by the original Tete Jaune Cache at the Grand Forks of the Fraser the group caught “a glorious sight, and one which the Shuswaps of the Cache assured us had rarely been seen by human eyes, the summit being generally hidden by clouds…a giant of giants…Robson’s Peak” (Milton and Cheadle).

On every side the snowy heads of mighty hills crowded round, whilst, immediately behind us, a giant among giants, and immeasurably supreme, rose Robson’s Peak. This magnificent mountain is of conical form, glacier clothed, and rugged. When we first caught site of it, a shroud of mist partially enveloped the summit, but this presently rolled away, and we saw its upper portion dimmed by a necklace of light feathery clouds, beyond which its apex of ice, glittering in the morning sun, shot up far into the blue heaven above, to a height of probably 10,000 or 15,000 feet. It was a glorious sight, and one which the Shuswaps of The Cache assured us had rarely been seen by human eyes, the summit being generally hidden by clouds. Milton and Cheadle, July, 1863

The next day was one that Cheadle would never forget for its hard luck and misfortune. Two of the horses (“The Fool” and “Bucephalus”) were carried off by the flooding Fraser. One horse (“Bucephalus”) was saved through the courageous efforts of the Assiniboine and his son.
The next day the group moved on towards the present Tete Jaune Cache and (with fewer hardships) managed to arrive there at nightfall, July 17, 1863. At Tete Jaune Cache they were able to secure badly needed provisions (salmon, berries, and pemmican). The old Iroquois guide turned back to Jasper and the remainder of the party followed the route to Kamloops. They arrived at the Fort “with clothes in tatters, the legs of Milton’s trousers torn off above the knees and Cheadles in ribbons, feet covered only in shreds of moccasins, faces gaunt, haggard and unshaven, hair long, unkempt and matted”. Their hosts were “anxious to know who we were, where from…whether intending to mine or seek employment, and seemed rather incredulous when informed that we were a mere party of pleasure”. (Milton and Cheadle)
O’Byrne was unloaded at the Fort and Milton, Cheadle and the Assiniboine and his wife and son continued on to Victoria.
The Railway Survey Era