Did you know that a golf ball flies 10% further in Colorado? Did you need to know?! As well as having some of the greatest mountain ranges in the world, great hikes and some of the friendliest people in America, Colorado has a lot of other little snippets that a visitor should know. 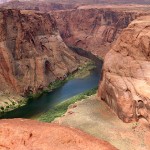