© Historical photos by Byron Harmon, courtesy of the Whyte Museum of the Canadian Rockies
Adapted From the Play Guardian Spirits
By Jeff Waugh
People have been coming to visit these mountains for a variety of reasons for thousands of years. First came the hunters and gatherers, then other nomadic Indian tribes, still later came the European explorers, railway surveyors, guides and outfitters, and tourists… Some of these people moved on, some stayed to call Banff home, others found home elsewhere.
The earliest known visitors to Banff arrived here some 12,000 years ago. Archaeologists surmise that nomadic Athabascan hunters and gatherers wandered into the Bow Valley on the heels of some of the ice-age animals they were hunting. We know this from evidence left at a primitive campsite on the shore of Vermilion Lake that was uncovered in the early 1980’s. I was at the archaeological dig as an old campfire was being uncovered. Carbon 14 analysis of some of the charcoal dated the site to about 12,000 years before present.
The ring of stones looked like something any one of us would have built to contain our campfire. Behind the hearth were a couple of holes that probably supported some sort of lean-to for protection against the wind. Flakes of chert, a special stone used in making spear and arrow points, were scattered around the fire, as were the bones of bison, sheep, elk and deer. Archaeologists believe these people came in and out of the valley for thousands of years.
In more recent times we think that the Sarcee, Piegan, Kootenai and Stoney made use of this mountain area. The Kootenai and Stoney were the most recent visitors. 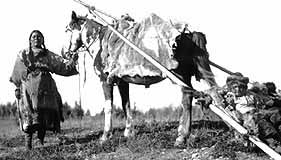 The Kootenai, relatives of the Shoshone from what is now Washington and Idaho, migrated from the south into the mountains to the west and east of the continental divide. Archaeologists have uncovered possible Kootenai camps along the Bow and Clearwater rivers in Banff National Park. They probably crossed the mountain passes and followed the rivers towards the prairie in search of bison and other game.
The Stoney, or Nakodah as they call themselves, are relatives of the Assiniboine and Sioux from the east. Some researchers believe they began their wandering migration after a smallpox outbreak in their homeland on the wooded edges of the Canadian Shield north of the Dakotas sometime in the 1600’s. By the mid-nineteenth century the Stoney considered these mountains their home and hunting grounds.
Imagine you and your family are camped on the shore of Vermilion Lake. Earlier tonight you heard the eerie howling of wolves and watched the northern lights dancing through the bright and twinkling stars in the crisp night sky. You hear the crackling of the fire your mother is building. It’s time to crawl into the warmth of your buffalo hide bed.

As you crawl into bed you see a large herd of elk grazing in the grass on the other side of the lake. One young bull near the trees bolts suddenly. You see something dark moving swiftly through the shadows behind him. A wolf, perhaps… You, too, are a young hunter. This winter and spring you helped your father hunt the bison, bighorn sheep, elk and deer that are attracted to the grasslands of the valley. Sometimes, in the depths of winters deathly cold, the warm spirit winds bring a breath of warm air to the valley bottoms. This melts the snow and makes it easier for the animals to get the grassy food they need.
Tomorrow, after your breakfast of meat and berries, maybe you’ll hike across the valley to soak in the warmth of the magical hot water spring. It’s a wonderful place to dream. Tonight, your thoughts are on the fire and the needed warmth it provides.
Your grandfather is warming up in front of the fire. He’s working on sharpening a spear point made from that special rock he found higher up the mountainside. He begins to tell you some stories that help you to dream.
“My grandfather told me about the spirits. There are spirits everywhere in Nature. I have heard one talking and it sounded like someone whistling. Spirits make the flowers and trees grow. Spirits cause the winds to blow and the clouds to float across the sky. Every bird and every animal has a spirit.
To get some of the spirit power from Nature and to find a protector through life, you must go out alone on a guardian spirit quest.
You must first bathe in the hot springs until you are very clean…
It is true that the hot springs show some of the mysterious ways of the Great Spirit. In the early days, we used to hear something in those springs. It’s a spirit, we would say. Sometimes we would hear it singing. Sometimes we would hear it whistling, making a sound like the bone whistles we use at a Sun Dance. We would wait around trying to see who it was and what was making the sounds. But we could never see anything in the water.
It’s a spirit that rules the hot springs and the paint springs the people would say.

Well, if you wish bear power, which is a very strong spirit power, you must lie down beside a bear’s den. Your vision will be a bear, and you will receive the spirit of the mighty bear.
Only a strong person can stay until the vision comes, for it often comes in the form of some dangerous animal. The animal tests your courage. If you do not run away from it, something talks to you, something that you cannot see…
Oh, yes, when I was a child I had dreams, but I never thought much about them until I was grown. Then I remembered that a buffalo had talked to me in all those dreams and I realized that the buffalo’s purpose on earth was to save life. My grandfather told me that human beings depend on the buffalo and the earth for food and for many other things we need.
My grandfather was wise because he was able to talk with the spirits. The animals and the birds were his brothers and he lived with them, so he was able to talk with them in their own language. The rocks and the trees were also his brothers so he talked with them and learned the secret ways of nature. He talked with the guardian spirits of the mountains who revealed their stories and dreams.
But now it is getting late… and I will let you dream about tomorrow. 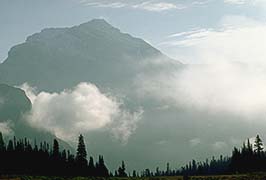