Our Banff Wildlife Safari begins in the middle of town – right outside the Park Information Centre at 224 Banff Avenue. We head east on Wolf Street and turn left onto Tunnel Mountain Road. Watch Wolf Street and Tunnel Mountain Road for some of the town’s resident wildlife – especially elk.
Before you know it, a huge bull elk with enormous antlers lifts his head from someone’s front yard. We slow down and pull over to the side of the road so everyone can get a good look. No one is allowed out of the vehicle, mainly because these bull elk can be extremely aggressive, particularly during the fall mating season or rut.
More than a few people have been sent to the hospital in Banff after encounters with these giant animals.
I used to live a couple of blocks from here and would awaken some mornings with the sound of these huge elk scratching their antlers up against the side of the house outside my bedroom window. A herd of bachelors would often loiter around the front and back of the house. We would always have to be very careful not to run out of the house too fast in the event we ran right into a big bull.

We pull back on to the road and head up Tunnel Mountain. On our right watch for faint traces of the spiral road that horse-drawn carriages used to take up the side of Tunnel Mountain. At the top of the hill we pass a few resorts and glimpse more elk grazing on the roadside grass at Tunnel Mountain Campground before we pull in at the Hoodoos’ parking lot.
The view of the Bow River and Mount Rundle on our right is superb. A couple of large ravens are sitting on the fence as we begin our short walk along the path to the Hoodoos. These interesting geological formations were considered guardian spirits by the Stoney or Nakodah native peoples.
We hear the ravens squawking as they catch the breeze and lift up overhead like spirits into the wind. Along these south facing open slopes we find the Rocky Mountain Juniper. This tree is at its northern most range here in Banff. Of the three species of juniper in the park it is the only one to grow tree-like (although not very tall). Most of the trees around us are lodgepole pines, but I point out a few white-bark pine trees growing below us. After our brief jaunt out to the Hoodoos, we return to Tunnel Mountain Road and turn right, winding our way back to Banff Avenue at the Rocky Mountain Resort.
Again, we turn right and head north under the train tracks and the Trans Canada Highway, past the airport and Cadet Camp, until we come to the junction to Two Jack and Johnson Lake. This junction is the beginning and end of the Lake Minnewanka Loop. At the junction, we turn right, heading around the Loop counterclockwise.
After winding up a big hill a kilometre past the junction, the road gradually meanders in a large open meadow. This is the site of the old Banff dump, which was cleaned up in 1980 to eliminate problems with garbage bears. The restored meadow is much more beautiful than the old dump, and provides impressive views of the surrounding mountains. On our left is a small marsh that’s frequented by ducks and geese, as well as elk, deer and coyotes. Today, as luck would have it, we pull out our spotting scopes and watch a few Canada Geese squawking on the far side of the marsh.
When we have all had a good look, we are back on the road through the pine forest past the turn-off to Johnson Lake and then past Two Jack Lake Campground and Two Jack Lake. This is a favorite spot for wind surfing, fishing, ice skating and cross-country skiing. Just up the hill from the lake we are stopped by a herd of bighorn sheep walking along in the middle of the road. There’s a big ram with a tremendous curl, a couple of ewes, and four or five lambs. 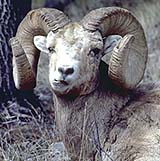 We pull over to the side of the road and watch the sheep licking salt from the road and looking for handouts from passersby. The sheep don’t find us offering any snacks, because we know that feeding them is more harmful to their health than it is good, providing them with an unnatural diet.
From Two Jack Lake to the Lake Minnewanka Picnic Area is one of the most reliable places to find sheep in the park. We spend a few minutes here and at the Palliser Viewpoint where we find more sheep, including a big ram resting quietly beneath the trees. The Palliser Viewpoint offers a spectacular view of Lake Minnewanka and the Palliser Range.
My wife has observed wolves crossing the ice on Minnewanka from here in the depths of winter. We don’t see any on this trip, but if you’re lucky enough you can often hear them howling or even catch a glimpse of the Cascade River pack racing across the road. We’re soon driving across the dam on Lake Minnewanka where a few more sheep have congregated.
The Cascade River outflow from Lake Minnewanka was first dammed in the early 1900’s to provide power to the Town of Banff and the mine at Bankhead. During World War II a larger dam was constructed in order to provide more electricity to Calgary and its factories.After crossing the dam we turn south to face the impressive cliffs and summit of Cascade Mountain.

The road carries on through the forest on the top of a glacial esker. At the end of the esker we turn right into the Upper Bankhead parking lot, and just as we turn in we spot a coyote chasing a ground squirrel in the grass. He pounces once, twice and grabs the squirrel by the neck and starts shaking it like a dog with a bone. Looks like lunch…. Once the coyote moves on, we set up the spotting scope and take a good look along the cliffs of Cascade above C-Level Cirque.
Aha! Just where I saw them hanging around last weekend when I hiked the trail into the cirque — two goats, just a white speck on the cliff to the naked eye, appear rather large and magnificent through the scope. This is a fairly reliable spot to find goats, and one of the best in the vicinity of Banff. From here we pile back into the vehicle and make a short hop over to the Lower Bankhead parking lot. Along the way we catch a glimpse of the old St. Mary’s Church which once proudly stood on the hill overlooking the coal mining town of Bankhead.

Out of the vehicle, we stretch our legs on the self-guiding trail that leads down into Bankhead. It’s an interesting and historical area to explore and a good place to see elk and coyotes.
After Bankhead, we head back towards the hustle and bustle of Banff…it’s been a great day and we’ve been lucky with all the wildlife we’ve seen. Some days I come out here and don’t see anything, and other days I have piles of luck.
Then again, it doesn’t really matter to me – I just enjoy being out and looking around, hoping to spot a wolf or a bear. Where else in the world could you hope to see all this in your own backyard?

Minnewanka Loop: Johnson Lake
The loop road starts at the interchange on the Trans-Canada Highway northeast of Banff. The narrow, winding road takes you to the following popular places:
Cascade Ponds, a day-use picnic area beside a large pond which may be warm enough to swim in; Lower Bankhead, site of an abandoned coal mine and plant, now interpreted by signed trails and exhibits; Upper Bankhead, site of the old coal mining community, now a day-use area with a shelter and picnic tables in an open meadow; and
Lake Minnewanka, the largest lake in the park and popular for boating, fishing, sailing, picnicking, hiking and camping. Rental boats are available along with fishing tackle for a day out on this 19.7 km-long lake.
From Minnewanka, the loop continues on to Two Jack Lake, a sheltered lake with facilities for picnickers. Further on a road branching off the loop runs to Johnson Lake, another day-use area centered on a shallow lake ringed with trails. Picnickers, hikers, sunbathers, fishermen, and swimmers congregate here during the summer.