The body of water that the Stoney Indian people knew as Ho-run-num-nay, the “Lake of the Little Fishes,” lies in a valley close to some of the higher peaks in the Canadian Rockies. The first non-native to behold it was Tom Wilson, who – led by a Stoney guide – reached its eastern shore in 1882.
The completion in 1885 of a transcontinental line on the Canadian Pacific Railway route, along with the construction in 1890 of the first commercial accommodation at Lake Louise, attracted increasing number of visitors. The Lake Louise area became an international destination, largely due to promotion by the CPR. 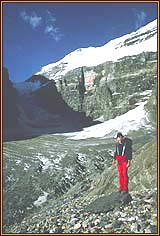 Pioneers such as Walter Wilcox and Samuel Allen explored and mapped much of the vicinity. The surrounding mountains became a mecca for alpinists. Their activities created notoriety for the area when Philip Stanley Abbot became the first person to die in a climbing accident in North America when he fell during an attempt on Mt. Lefroy in 1896.
Legislation had created the Lake Louise Forest Park in 1892, but it was not until 1902 that the area including Lake Louise and Moraine Lake came under the protection of an expanded Banff National Park. Recreational hikers were drawn by a proliferation of trails, such as those to Lake Agnes and the Saddleback – built in the early 1890s under the supervision of Willoughby Astley, first manager of the original Chalet. A number of teahouses provided to cater to hikers proved popular (two of them, at the Plain of Six Glaciers and Lake Agnes, are still operating).
The works of the many painters who responded to the Lake Louise area, among them Belmore Browne, Lawren Harris of the Group of Seven, and Banff residents Peter and Catharine Whyte, helped to further spread recognition of the area. Road construction facilitated access, and visitors flocked to see for themselves the renowned scenery.
The Lake Louise area has become one of the premier attractions of Banff National Park, and indeed of the entire Canadian Rockies. You can marvel at the panoramic vistas from a distance, but to gain a better appreciation of these fabled environs, head out on foot to experience their fascination firsthand.
This guidebook beckons you to explore more than 270 kilometres (over 165 miles) of trails and routes within a 16 km (10 mi) radius centered on Lake Louise village. This area of some 600 square kilometres, with its concentration of hiking possibilities, can be the focus of excursions – whether short walks, day hikes, backpacking trips, or off-trail scrambles – during which you will garner in-depth knowledge of natural and human history.
You will also gather what may well become some of your most cherished memories…