Wendy Bush has her own website
While not writing or galavanting towards the newest windmill on the horizon Wendy can be found at the Banff National Park Information Center doling out trivia and running her own version of
“Adopt a Tourist” Program – please keep her busy…. 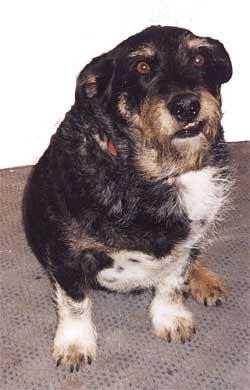 Bart Muldoon’s physical stature challenges most people’s concept of a mountain dog. Hailing from Hinton, Bart has spent the last nine summers protecting horse camps equipment from marauding porcupines, warning riders of approaching grizzlies or black bears and generally being a good camp canine. This terrier/ dashound/ blue heeler/ Australian Shepherd melange is well known locally for his recent fame as pawtographer of a new book on the history of working dogs in western Canada.
Bart is reputedly to have followed in some of the paw prints of Whisky, a canine who, in 1859, travelled from Fort Edmonton into the mountains of what is now known as Jasper National Park.
Bart, however, has been most recently employed at the newly re-named “Book and Bart Den”, where sales of dog books have skyrocketed! “Bart is without a doubt one of the sweetest most lovely creatures I have ever meet in my entire life.” gushed Cat Klerks a fellow employee at the store. Clearly enchanted by Bart’s captivating personality Cat is enthralled. “He’s got the most rocking eyebrows. And I don’t even like dogs!”
Name: Bart Muldoon, resident of Hinton, Alberta Birthday: June16th, 1990
Likes: Pizza, calamarie, moose steak and barking up trees at squirrels.
Dislikes: Kibble, though will eat some if everyone has gone to bed and there’s no possible way to score a better deal.
Favorite Fantasy: A 24 hour belly rub from his pet human.
Best Tricks: The Bart Grin and the Belly Enticement as well as the walking unconcerned through a herd of sleeping elk trick. 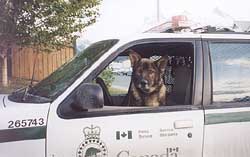 Editors Note: Do not go ANYWHERE NEAR this dog when he’s in this vehicle…. We’ve seen other wardens hurdle their own trucks because they parked next to the “DOG TRUCK” and forgotten that Data has a small possesive problem …
Well known to many residents in the Canadian Rockies as well as nationally. Data, Banff National Park’s Search and Rescue Dog has been on hundreds of missions. He’s really keen to have the spot light as Mutt of the Month particularly at this time of year. In recent Novembers, more and more people have been heading out into the backcountry before the winter has set up. They seem anxious to try out new gear and get a jump on the ski season.
In 1997 Data was called out to pick up four dead Calgary skiers out of an avalanche on Fortress Mountain. The hill was not open so they didn’t even have to ski out of bounds to get caught in an unstable wind slab avalanche. In November, 1998, the call came for Data to fly with his handler Scott Ward of Banff into Lake O’Hara in Yoho Park. There they located within the hour the body of a woman skier. That incident looked after, the team was dispatched a few mountain ranges over to search for Michael Trudeau who had been backcountry skiing in avalanche terrain.
Generally, November and early December is not a good time of year for backcountry expeditions or fun in the snow. Specifically, the problem at Lake O’Hara and Fortress was wind loading. “There was not much snow on the ground but what little had fallen was cross loaded into gulleys and then set up as a slab of snow overlying a weak base on the ground surface,” explained Data’s partner. “Not a great situation to find yourself in.”
In his relatively short career Data has found a dozen or so bodies of avalanche victims and suicides. Narcotic searches and evidence at poaching scenes are pretty much routine.
A highly educated canine, Data has spent about 12 months training and 16 weeks at Innisfail, the RCMP dog training centre. His diploma from the RCMP Police Dog Services includes tracking fleeing felons and finding lost civilians. Courses in searching for narcotics, firearms, shell casings, human scented articles, live and dead people, obedience, agility, retrieving and criminal apprehension rounded out his education. Data also holds a diploma in avalanche searching and has to re-validate annually for all of these things.
Data’s partner, Scott Ward, has worked with two other search dogs but says, “Data’s been my best all-round dog. Good with scenting narcotics, or tracking a specific fresh scent through town and in avalanches, Data has good street aggression and a nice personality.”
Always keen to get to work Data, when at home, keeps a steady surveillance on the dog truck. However, his favorite transportation seems to be oversnow vehicles. Scott has been frequently embarrassed by Data’s enthusiastic barrage of barking on the back of the snowmobile when they ride past Sunshine Village and up through the ski area.
November is a month for reflection,” telepaths Data. “A month to get your gear in order for the coming ski season. A the time to re-read your avalanche text books. I like the excitement of the chase, and the reward of the find but really, I don’t wanna have to go out there and dig up another over anxious skier who just had to get out there before the season has had time to set up.”
“Me neither.” agrees Scott.
Name: Data.
Named so Scott Ward could claim the title of Data Manager for Banff Park.
Residence: Canmore, Alberta
Birthday: Oct. 15, 1993
Likes: Going to work and barking in the back of the truck. Especially likes leaping at the window and watching people leap back or drop all their groceries. Likes his Kong ball. Will endlessly search for drugs just to hold it in his mouth for 5 seconds as a reward for a find.
Dislikes: Going to the RCMP kennels for boarding while Scott is on vacation.

Favorite Transportation: Snowmobiles. However he does like to ride inside helicopters much better than being slung underneath them.
Best Arrest: Always the last arrest. In mid October, Data apprehended two escapees from the Prison Work Crew who fled from the Canmore Nordic Center. Data’s nose tracked them before they got much more than several kilometres away.
Best Search: A bear mauling victim was buried under waist deep unconsolidated snow. Data Dog searched for seven hours before finding the body.
Favorite Fantasy: Being able to sniff other dogs and their by-products as Scott is always telling him NO to keep his mind on work. As well, he’s interested in a good looking female canine to loose his virginity.