In 1865, Dr. John Rae, sponsored by the Hudson’s Bay Company, the Imperial and Canadian governments, and the Grand Trunk Pacific Railway, made a trip through Yellowhead Pass. He surveyed the pass for the possibility of a railway, wagon road and telegraph line going through to connect the new colonies in British Columbia with the rest of Canada.
The possibility of a railway through the Yellowhead spurred further interest, but it wasn’t until 1871 that the next railway survey began. Walter Moberly, the brother of H.J. Moberly, took charge of a survey party under the direction of Sir Sandford Fleming, the newly appointed (by Sir John A MacDonald) engineer-in-charge of the transcontinental railway (Canadian Pacific Railway).

Moberly, working on the upper reaches of the Columbia River, sent Roderick McLennan to survey the area of the North Thompson across Albreda Pass to Tete Jaune Cache and up the Yellowhead. A.R.C. Selwyn, of the Geological Survey of Canada, travelled with McLennan and made detailed observations of the area.
In April of 1872 Sandford Fleming ordered Moberly to direct all survey efforts on the Yellowhead Pass. Fleming organized an expedition and set out to follow his chosen railway route from Halifax to Victoria. Amongst the men of Fleming’s expedition was the Reverend George M. Grant who accurately recorded the journey in his diary. “At the summit, Moberly welcomed us into British Columbia, for we were at length out of ‘No-man’s-land’ and had entered the western province of our Dominion. Round the rivulet running west the party gathered, and drank from its waters to the Queen and the Dominion”.
The survey for the railroad proceeded along the north side of the pass as the bluffs were not as steep as those on the south side. At Moose Lake the surveyors considered there to be no formidable barriers to the construction of a railway through the Yellowhead Pass. But as Grant prophetically recorded, “Still the work that the surveyors are engaged on requires a patience and forethought that few who ride in Pullman cars on the road in after years will ever appreciate”. As they continued down through the Yellowhead they were extremely impressed by the “first canyon” of the Fraser.
Eventually Flemings party reached Tete Jaune Cache, ascended the McLennan River and began the descent of the Thompson and Fraser Rivers to Vancouver and on to Victoria.

We have not sustained any loss of life nor had any accidents, not a single pound of the supplies has been lost in transit, and out of nearly two hundred and fifty pack animals employed, only seven have died in all, nearly all the pack animals on this route travelled back and forth last season about twenty-seven hundred miles, and almost invariably averaged loads of three hundred pounds each… Not a single quarrel has arisen, not a single article has been stolen, and without exception the most friendly feeling is now existing. The Indians have rendered us much and valuable assistance. Walter Moberly, 1872

After the exploratory surveys between 1871 and 1880 the Yellowhead Pass was found to be the most acceptable pass. However, in 1881, something happened to change this. The C.P.R. unexpectedly (and with much controversy) abandoned its proposed route through the Yellowhead for a more southerly route through the Kicking Horse Pass.Activity in the Yellowhead slowed to a snails pace.
Between 1881 and the turn of the century the Yellowhead Pass experienced little activity. In 1898, James McEvoy, a geologist, travelled through the pass and made first mention of Yuh-hai-has-kun (The Mountain of the Spiral Road), the Shuswap name for Mt. Robson.
On his way from the Grand Forks down the Fraser he reported that “fire had desecrated the valley”. Soon after mcEvoy left the area a small group of miners struck gold at the confluence of Swiftcurrent Creek and the Fraser. Several small, well provisioned parties began to flock into the area, but, unable to make any profit, they gradually drifted away. In 1899, Swiftcurrent Creek made headlines again, this time under unfortunate circumstances: a murder in the Yellowhead. 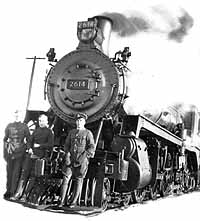 A dispute between two fur traders resulted in death. Coming Through the Rockies – Waugh Family Album By 1900 the Grand Trunk Pacific, then one of Canada’s major railway corporations, began talking about a second transcontinental railway.
Thirty-six years earlier Dr. John Rae had made a speedy survey of the Yellowhead Pass for the Grand Trunk and, once again, more interest was shown in this route for a possible railway line. Not only did the Grand Trunk Pacific railway begin to show interest, but another railway, the Canadian Northern, began to send surveyors and pack trains through the pass.
Once again the Yellowhead Pass was showing more promise as a bustling transportation route.
Early Climbers, Tourists and Settlements