Taking a Hike in Jasper National Park
Jasper, Alberta
Hiking is my middle name. Well, hiking used to be my middle name until I started smoking. I used to be able to hike until the cows came home. Often I would hike to bring the cow’s home. So it was with much frustration that I found myself this winter puffing like a broken down car as I recovered from some gentle walks on the Canadian Rockies finest hiking trails. With this in mind, I made a late New Years resolution to tackle one of Jasper National Parks longest and most difficult trails and give up cigarettes forever.

The Road Trip
Oh, how things are easier said than done. The road trip to Jasper was hard enough at 6 am 0n a freezing morning without my best friend, the Marlboro Man. But once I got going, the sights on the way from Banff to Jasper were more than enough to distract me from that nagging desire to put a cancer stick to my lips. Then there was the task of choosing the right trail. I thought long and hard about hiking Disaster Point just for the pure beautiful irony it might hold. But in the end Snake Indian Falls was the destination due to its extremity.
The Climb
Almost 30km each way faced this unfit Mountain Man. I was hoping to do it in 8 hours, but I left extra early just to make sure I didn’t become a snack for a grizzly in the dark. The trek started nicely as I crossed the Snake Indian River on the Bailey Bridge, and the rest of the hike was a steady rise and decline through the rugged hills and stunning landscape. If it wasn’t for the beauty of my surroundings I’m not so sure I could have completed this crazy quest, as the trail just seemed endless. But indeed there was an end. 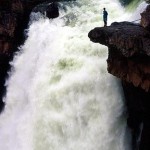 The Relief
At 28km in I thought I was losing my mind. Every tree looked like a giant cigarette, and my lungs were close to the bursting point. But then I heard it…the sound of a powerful waterfall not far away. The Indian Falls were absolutely incredible. There was no one there except me and the “giant cigarette trees” and suddenly the sense of accomplishment canceled out the pain. Realising that despite my achievement I was still only half way, I admired the view for only half an hour before starting the return trip, which was shorter somehow. All in all, it took 12 long, long hours, but man was it worth it. When I eventually got back to my hotel in Jasper, I drank a celebratory beer to the health of Mountain Man. I think it might have been the tastiest beer I’ve ever had! Mountain Man 1 – Jasper National Park 0.
For More Hikes