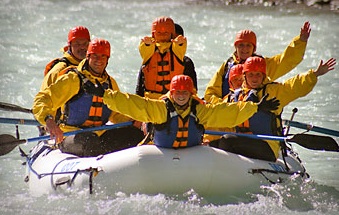 Liz Behler
CanadianRockies.net
Staff Writer
BANFF, ALBERTA – Canada – The raging rapids of the Kicking Horse River draw thrill seekers of all backgrounds to Banff, Alberta. Families, friends, nature lovers, and even celebrities have searched out the waters here.
“Once you’re on the river, you’re always in the action,” says Ted Bilton, owner of Wild Water Adventures, the go-to whitewater outfitter for celebrities visiting the Banff area. “Unlike other rivers, which have long sections where you just float, the Kicking Horse River has a continuity that makes it fun to be on. The water is the constant entertainment.”
In business for 20 years, Wild Water has become the choice for many visiting the Banff, Alberta area in the Canadian Rockies, including high-profile celebrities.
“We have a reputation as a high-end provider,” says Bilton. “We’re known for our high level of service and our high degree of concern for risk management. Celebrities choose us for the reputation we have in the area.”

Celebrities That Raft with Wild Water in Banff, Alberta

When pressed for some names of his celebrity clientele, Bilton is evasive. He prefers to uphold his client’s privacy, part of his company’s resolve for a higher standard of service. Bilton instead lists the types of celebs who have previously rafted with Wild Water — country western singers in for the Calgary Stampede, NHL hockey players, former heavyweight boxing champs, PGA and LPGA tour players, and Saudi royal family members.
“It was especially memorable when we hosted some of the Saudi princes and princesses,” says Bilton. “They come from a country with hardly any water. The river was astounding to them…and so were the temperatures.”
Wild Water operates tours on the Kicking Horse River, a glacier-fed river with rapids that range from Class II to IV+, in Banff, Alberta. Wild Water has offices in Lake Louise, located in Banff National Park.

More of The Best Things to Do in Banff, Alberta

Explore Banff, Alberta
Don’t pack up as soon as you finish rafting the Kicking Horse River. There’s plenty more to do in Banff, Alberta!  Explore Banff National Park, discover the beauty of Lake Louise, or make the most of your time with a tour from Banff Travel. Want more whitewater? Other Banff, Alberta whitewater rafting guide outfitters include Banff Rafting and Banff Whitewater Rafting.
Visit Nearby Jasper, Alberta
Only four hours away via the scenic Icefields Parkway, Jasper, situated in the middle of scenic Jasper National Park, is a must-see destination for those visiting the Banff, Alberta area. Check out JasperVacations.com for tours or visit Jasper Vacations for information about whitewater adventures in Jasper, Alberta.